Our last Disney water park day of the holiday. As you’d expect, it was a day full of slides and lazy river relaxation. I watched Matt do Summit Plummet and we got a literal bucket of ice cream. What a day.

We played one last game of Winter Summerland mini golf in the evening as it’s right next to Blizzard Beach.

Somehow, even with four weeks, we were running out of time to do things. We did Epcot in the morning then exited at International Gateway and went to the Beach Club for lunch. We had dessert at Beaches and Cream which was so needed; it was a very hot day. 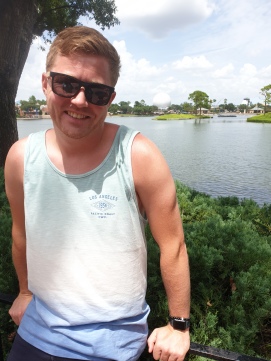 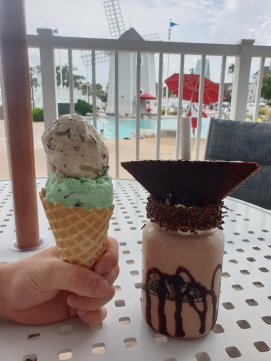 We got the boat to Hollywood Studios to do the Frozen sing-along, Slinky Dog Dash and Rock ‘n’ Roller Coaster. I even did a very brave thing and queued up with Matt for Tower of Terror… I didn’t ride it obviously but the queue was enough to make me feel sick…

Going against everything I stand for, we didn’t watch Fantasmic! as I wanted to see the Animation and Star Wars fireworks before I leave and Cast Members are blocked out of Hollywood Studios in a couple of weeks for the new Star Wars land opening. They were good but I don’t need to see them again… Fantasmic! rules forever!!! 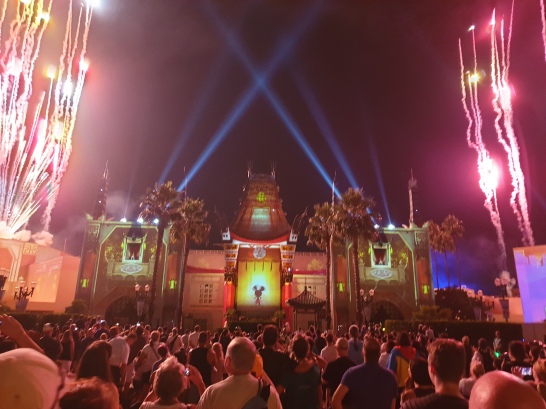 From Hollywood Studios, we got the bus to Disney Springs for dinner at Blaze Pizza and went to Sprinkles for dessert. I’m going to miss coming here for date nights…

After a morning by the pool, we got ready to go to Mickey’s Not So Scary Hallowe’en Party at the Magic Kingdom tonight. Matt hasn’t done a party in Disney before so I couldn’t wait for him to experience it.

Elin had the genius idea of dressing up as a dead bride and groom, so that’s what we did! It was a great excuse to buy the ears… we got loads of compliments throughout the night as well!

We rode Space Mountain in the dark, saw the live actors in the Pirates of the Caribbean, rode Mine Train and Haunted Mansion, got lots of candy, watched the new firework show and the Hocus Pocus show then watched the parade at the end of the night. It was so much fun but I wish we had more time because we couldn’t fit everything in! 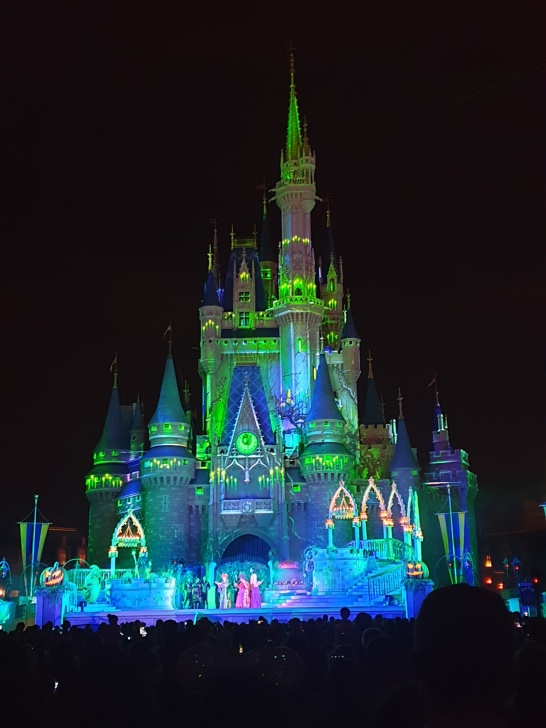 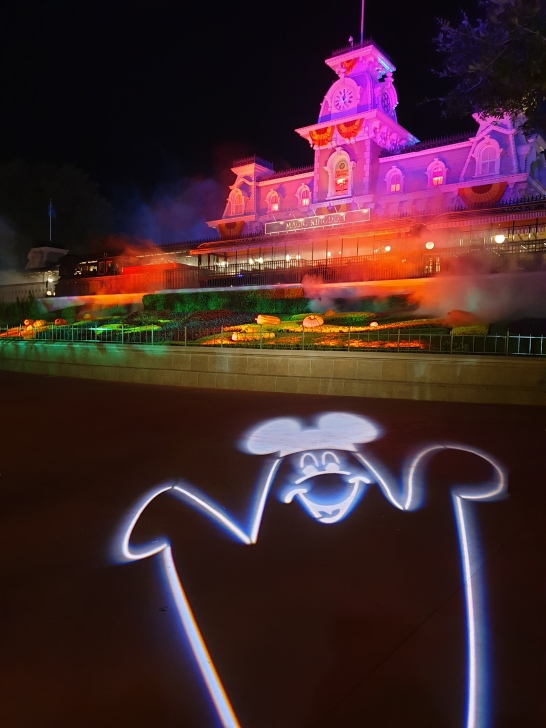 Matt hasn’t done Avatar: Flight of Passage yet as it was too busy when we came at Christmas. We managed to get Fastpasses on the day though so we were buzzing! We did pretty much all the rides, Everest three times and the new Animation class at Rafiki’s Planet Watch. 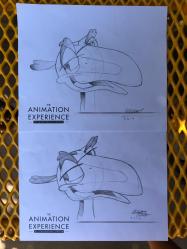 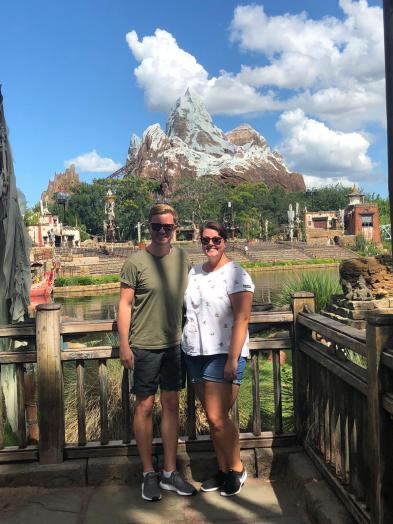 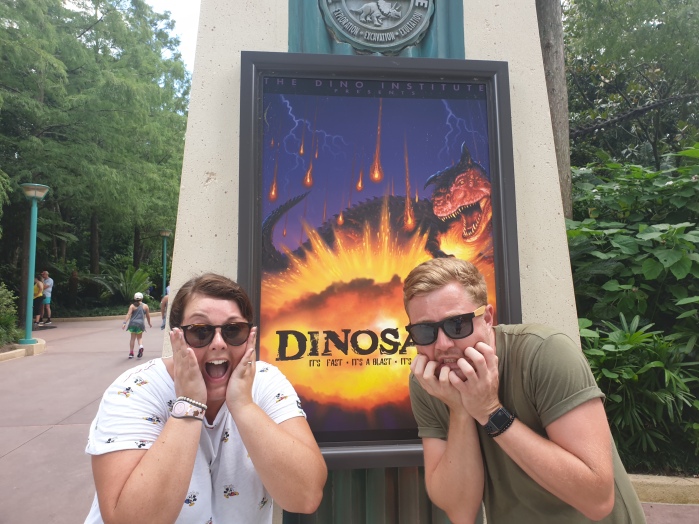 We met Chloe, Elin, Jason and Nicole in the afternoon and went for dinner at Yak and Yeti. I’ve never eaten here before but I’ve heard great things. It was incredible! The service, the food and the theming was all amazing. I’d love to go back before I leave but I don’t think I’ll have a chance.

After dinner, we rode Dinosaur as it was about to close for the night. It was so quiet that after we rode it once, we were allowed to stay on and ride again! We were all a bit hyper after a great dinner so we were doing silly poses for the photos. It was a great time. 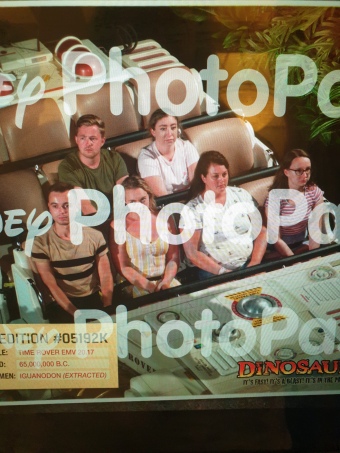 We then went to watch the Rivers of Light show at the end of the night. I wasn’t expecting much as I didn’t really enjoy it the first time but it had been updated and I like the new one much better! It is very pretty with the projections and water fountains.

Matt and I were up early for our last full day. I had booked the Keys to the Kingdom tour as a surprise; it’s a 5 hour walking tour of Magic Kingdom and you are shown areas backstage and learn about how the Disney magic is brought to life.  Being a Cast Member, I already knew a lot of the information shared with us throughout the tour but I absolutely LOVED it and still found it so interesting. I also really enjoyed that Matt was learning lots of things and that he could also see backstage areas, especially the Utilidors underneath the park which was the highlight for me.

We also got to ride Jungle Cruise and Haunted Mansion while learning things about those and we had lunch in Pecos Bill, my favourite place to eat in MK! I won’t say any more about it here, just in case anyone reading is planning on doing it in the future, but it was such a great morning and I would recommend it to anyone! Our tour guide was called Anna and she was brilliant. 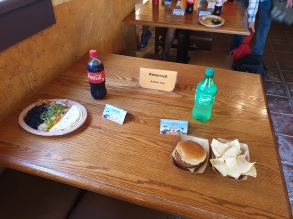 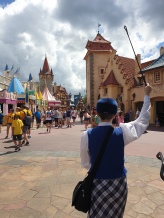 After the tour had finished, we watched the Festival of Fantasy parade on our way out. After our early start, combined with the heat, we were exhausted so we went back to the hotel to relax at the pool for a couple of hours before going back for the fireworks in the evening. 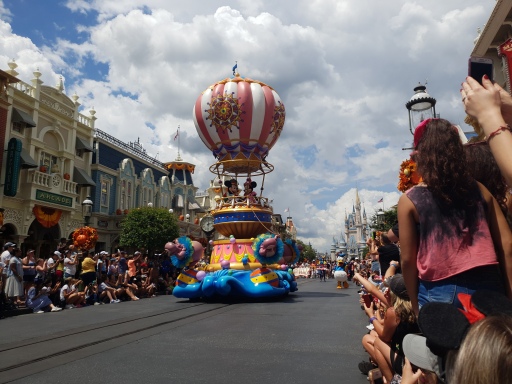 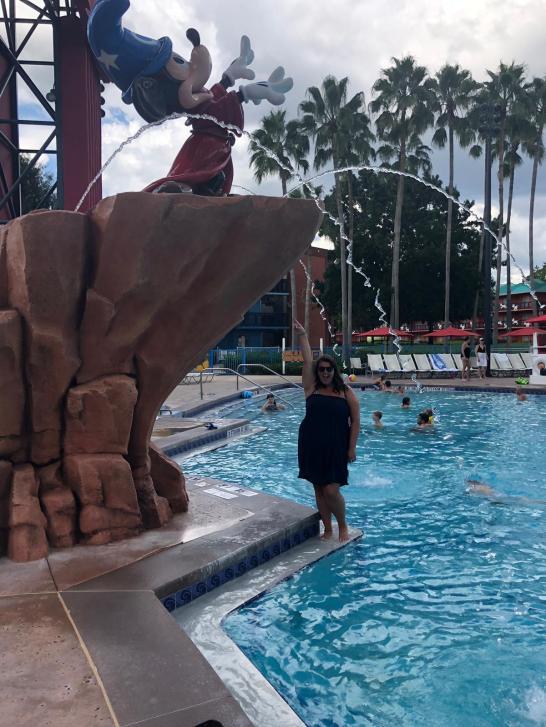 I cry every time I watch Happily Ever After but I sobbed this evening as it was Matt’s last night. I will really miss watching it with him, it is just so special. 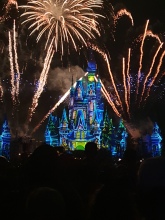 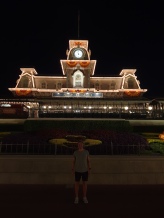 The day that Matt leaves had to arrive eventually… I thought I would be OK as it’s not long until I come home myself. However, after an incredible four weeks together with so many special moments, I was so upset. Having the best time almost made it worse because I didn’t want it to come to an end. 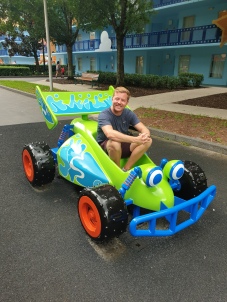 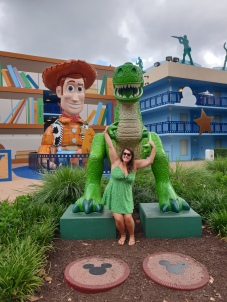 I tried keeping myself busy for the rest of the day with unpacking, etc, then Elin got home and we had a lovely catch up. Back to ‘reality’!

After my first day back at work yesterday, I had my regular days off today and tomorrow. Louise (a friend from work who got engaged a few months ago) and I had decided to attend a wedding expo happening near where we live. It still feels weird that I’m now in the world of being a bride and planning weddings so I thought it would be fun!

We ate lots of food and cake samples, looked at dresses and looked around lots of stalls… the highlight being the Disney Fairy Tale Weddings stand. We got bride and groom Disney pens!!! I’m not even thinking about starting to plan a wedding yet but it was really fun to have a look round and get the free stuff, of course! 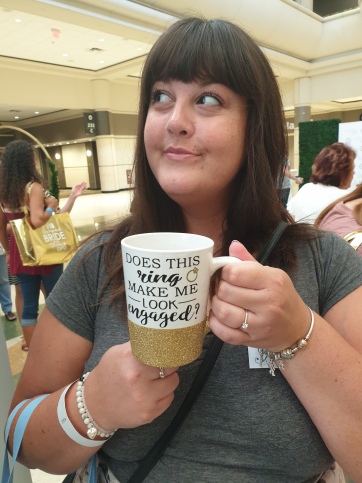